Even pumping up the voltage to the MCP didn't do any good at all.

The Bad The K8N SLI had the kind of MSI P4N SLI 3.3 quality that MSI has exhibited in all their recent boards so much so that there wasn't really anything we particularly disliked about the board. If we were to nitpick, there were probably only one or two minor issues that came to attention. Since the board had undergone some slight alterations in design to accommodate two extra PCIe x1 slots, the row of expansion slots seemed to be slightly cramped. The SLI switch card on the board has an extremely unforgiving clearance space.

One of the minor problems with the board is the location of the Southbridge right below the second PCIe x16 slot. Probably the only serious drawback is the location of the north bridge with a high cooler: Heatsinks on both chipset bridges are almost scalding to a touch when operating, so active cooling of the north bridge and the copper disc in the MSI P4N SLI 3.3 base on the south bridge do not look excessive at all.

The main regulator uses electrolytic capacitors from Sanyo and Rubycon an excellent choice! In this model MSI P4N SLI 3.3 broke its good habit to cool field-effect transistors in the CPU power circuit with small heatsinks probably due to the increased number of transistors per channel: The board uses a convenient button instead of the standard jumper to clear CMOS.

Access to it is not hampered even when the board is installed into a chassis. But a short description of its functionality is provided on a PCB.

Board Layout The overall layout of the board was well thought out with only a few exceptions. The extra Molex power connector, on the other hand, is positioned in a place that will require careful cable management to prevent having wires draped directly over the CPU HSF, which is far MSI P4N SLI 3.3 ideal.

The CPU socket is mostly clear of obstructions except for a few capacitors as well as the tall North Bridge cooler. Release Date. 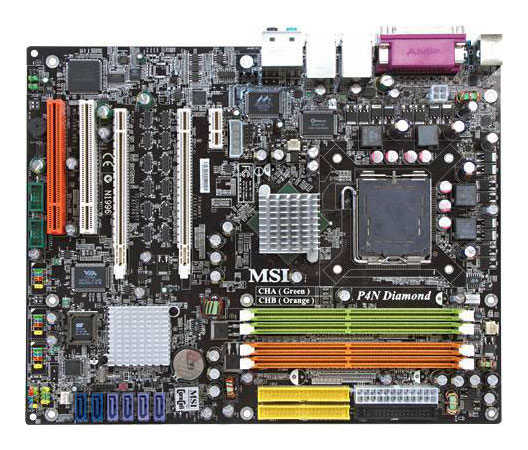